Everything You Need To Know About Nitro Coffee Kegs 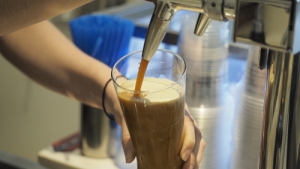 If you've been in a coffee shop recently, you've probably seen the taps that have made their way into the baristas' regular routine. As summer heats up, nitrogen-infused coffee is becoming all the rage from coffee shops to grocery stores to offices across the country. If you're an iced coffee lover, you're about to become a nitro cold brew fanatic! Here's everything you need to know about the nitro coffee system.

How The Nitro Cold Brew System Got Started

Nearly a decade ago, coffee shop owners faced a dilemma – people wanted iced coffee and they wanted a lot of it. A coffee shop in Astoria called The Queen's Kickshaw decided to run their iced coffee through their draft system to make their baristas' responsibilities a little easier to manage. This was the start of draft coffee, which is poured straight through the tap and eventually evolved into what we now know as nitro cold brew.

This increasingly popular drink is infused with nitrogen gas and stored in a nitro cold brew keg system that keeps the coffee highly pressurized. The high pressure creates a creamy, stout-like effect, much like a Guinness beer. It can be served straight from the tap or, as is becoming more common, in a can.

How To Drink It

Nitro cold brew is served in a unique fashion compared to what we traditionally expect when we think of iced coffee. First of all, it's not iced. It stays chilled in the nitro cold brew keg and drinking it straight from the tap ensures that the foamy, crema top is not disturbed – which is one of the hallmarks of the drink.

The same goes for adding milk, cream, or sugar. You want to drink your nitro cold brew as is. This means it's the perfect drink for those accustomed to black coffee. However, some shops will offer a cold brew that is enriched with sweet cream already, so if you prefer a sweeter drink, look for that one.

Because nitrogen-infused coffee is brewed cold, usually through a slow steeping process, and served without ice or other additives, it is significantly more concentrated than your typical iced coffee. You can enjoy the taste of rich, cold-brewed coffee without the extra calories or diluted flavor.

Many local and national coffee shops now offer some sort of nitro cold brew, whether straight from the tap or in a pre-packed form and as the drink continues to gain popularity, it will become even easier to find. When you're looking for nitro coffee in Denver, check your local coffee shops, your corner Starbucks, or even your local grocery stores. Don't want to leave your office? You can get nitro cold brew in your Denver office with redcup!

redcup Beverage Service works with your office or building to build a custom-made cold-brew tap so that you can enjoy nitrogen-infused coffee right from your desk. If your employees are constantly leaving the office to grab a cup of joe from the corner shop, a nitro tap may be the answer to increasing productivity and employee satisfaction. Contact redcup today to schedule a tasting and see how a nitro cold brew keg could transform your office.

More in this category: « Colorado Coffee Brands You HAVE To Try How Does Coffee Roasting Work? »
back to top